Well here’s one I didn’t think I’d be writing. Kuwait has been a great place to live and discover, and I’ve been out here nearly a year now. Honestly I thought I was fairly well versed on the offerings of the city. Imagine my surprise when I was browsing through a couple local blogs and found an Opera. A two day performance of Don Giovani performed by the local Ahmadi Music Group.

I had to go. I honestly hadn’t been to a true-to-life Opera before. I’ve seen dozens, perhaps hundreds, of musicals and plays in venues from Broadway in NYC to the Sydney Opera House in Australia, stages in London and the Philippines, even in my local performing arts center in Spokane, WA. I’m an avid theatre attendee and the Symphony is one of my favorite places to spend an evening.

I quickly went to the Ahmadi Music Group‘s website and bought myself a ticket to the performance. I made sure I had that evening off from work, and when it finally came I went into the performance with healthy skepticism. The one thought that hung over the experience was – how good could a local group in Kuwait be? The answer, to my enjoyment, is, they’re very good!

The Abdulhusain Adbulridha Theatre (formerly the Salmiya Theatre if you’re looking on google maps for it) was probably the thing that eased my worries right away. Upon walking into the building it looks as formidable and modern as you would expect any top quality theatre to look. Concrete walls and wood accents were captivating to the eye.

The performance was done in English, which was ideal for me as I don’t speak Italian, and would have been lost otherwise – or so I would have imagined, except the entire show had captions projected onto an over the stage screen in both English and Arabic, so that even if the audience didn’t exactly catch what an actor was saying,  they could stay caught up on screen.

The show took an interesting twist in being a sort of 70’s stylized interpretation of the costuming. The story itself however was true to Mozart’s intent, as was the Symphony orchestra that accompanied the show. The musicians were phenomenal and produced a very moving rendition of the entire show.

I also learned today that in addition to having the music group, there is a school of ballet in Kuwait as well – and their dancers provided a lot of presence on the stage throughout the acts. I’ll apologize now for the meer existence of this photo – yes, I took my phone out during the show and snapped this pic, I had to have it! I promise the phone was on silent and promptly went back into my pocket….also…this was in direct defiance of the posted “not photos” signs at the entrance…and act I do not regret.

All in the night was a roaring success. Powerful vocals, combined with an enjoyable comedic element, and a powerful Symphony left me in awe of the local production. A quick survey of the faces on stage and in the pit revealed that almost the entire production was made up of expats. Surely this is a global melting pot of artistic talent and the results were stellar. As soon as I was home I was back on the Ahmadi website looking at their upcoming events. If you’re in Kuwait for work, for life, or just passing through – check out their site and if you can make a show, I highly recommend it. 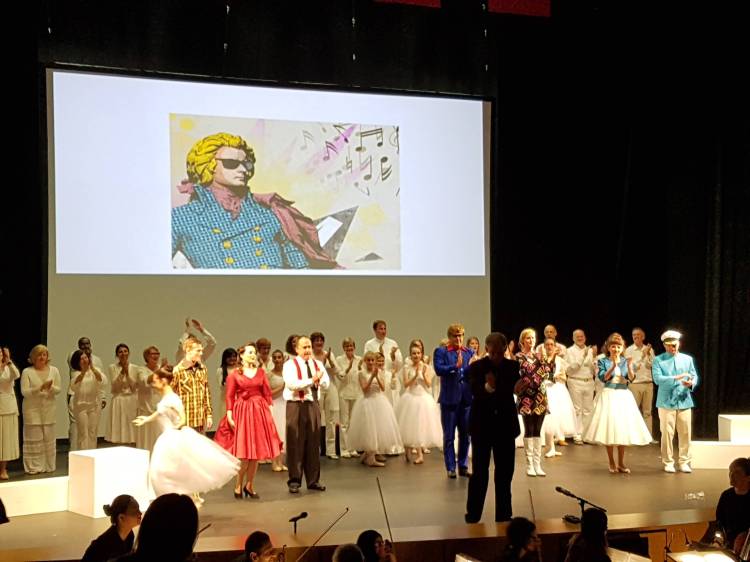 The entire cast, and the Orchestra Conductor on stage for a final curtain call and bow. (Check out that plaid suit! I need to get one of those!)